Silence in the hill-country 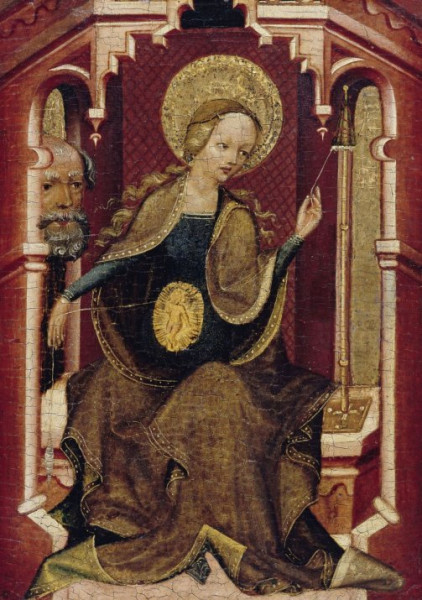 Mary arrived in the hill country of Judah, nauseated and exhausted with the first stage of pregnancy. She was still deeply unsettled from that night a few weeks before, from the angel, from the choice she had made, from the knowledge that nothing would ever be the same again. And Joseph...she wasn't ready to think about Joseph.

Then came that first conversation in the doorway. On the one hand, knowing that Elizabeth and Zechariah believed her story not because it was she who told it, but because they knew it to be true, was a comfort. On the other, she was sick to death of words. She'd come to the house for quiet Elizabeth and silent Zechariah, not for prophecy and proclamation.

They let her be, though, after that first day. She spent her mornings helping with chores, and there were small, necessary words then. But in the afternoons, when the longing for silence came upon her, she left the house and climbed the hill behind it. There was an olive tree there, and a stone to sit on with her distaff and spindle, looking north toward Nazareth. She'd brought some wool-work with her, but a week or so after her arrival Elizabeth handed her a basket of flax, well redded and ready for combing, perfect for swaddling clothes.

She was sitting in the afternoon sunlight the next day, combing the tow from the long linen fibers, when she heard Zechariah's hesitant steps coming uphill through the dry grass. She glanced up when he stopped beside her. He was looking at her, head tilted, asking permission. She nodded, and he settled himself under the tree to her left. She watched his profile for a while as he gazed hungrily into the distance, north toward Jerusalem, then turned back to her work.

She didn't know him, not really. Priests, men of words and influence, don't spend a lot of time with little provincial girls, even at family gatherings. But now that was all gone, after his failure at the Temple, and she could see the loss of it in his face. As one dreading her own coming disgrace, she gave him what she herself hoped to receive: kindness and silence. The only sound was her comb scraping through the flax.

He looked northward for a time, then turned to her. She set her work down and met his gaze. His mouth moved a little, but there was no meaning in it. He had not simply lost the power to speak aloud, she realized, but to use language at all. The priest had lost all his words. She smiled a little, sympathetically, but the anger gathered in his face and he stalked off toward the house.

But the next day he was back, again asking permission with a look before sitting beside her. He stayed longer this time, then grew restless and irritable and left. He gradually became her regular afternoon companion, remaining for ever-longer periods, settling into the silence. After a while he started bringing handwork of his own: a scroll-spindle that needed a new handle, a sandal with a broken strap, a half-carved child's toy. He was clumsy at first, out of practice, but his hands grew surer as he worked through the long afternoons.

Finally Elizabeth's time drew near, and with it, the end of Mary's visit. Her nausea was abating at last, though the babe was not yet showing. The basket beside her on the hilltop was full of skeins of fine white linen thread, smooth and neat, ready for weaving. Zechariah was carving again, finishing a second toy, twin to the one that lay ready in the crib inside the house.

It was their last afternoon together in the silence, and they treasured the rituals of it: the asking and granting of permission, the subtle counterpoint of the rhythms of spinning and carving, the scent of the olive tree, the vista to the north.

And then from that north, up the steep side of the hill, a stranger came, one they had not seen approaching before he arrived. He looked entirely ordinary to Mary until she met his gaze. Then she knew that he was not ordinary at all. His eyes, otherwise brown, shone when looked at straight on, shone with a light she hadn't seen for three months. She knew him for the one who had appeared at her bed and told her not to fear, who had allowed her the freedom to choose, who had stepped aside and vanished as the Spirit came upon her.

She turned to Zechariah, about to say something, and saw that he was looking at the newcomer with recognition and a kind of shame. He had tears in his eyes. The visitor raised his hand above Zechariah's head, and the priest bowed like an ordinary man receiving a blessing. When he looked up again, she thought there was a different quality to his ever-present silence. He no longer seemed shocked into it, robbed of his speech after some terrible encounter. Instead, he held himself like a messenger, guarding a revelation until the right moment. Like a prophet whose time was not yet come.

The visitor turned to Mary again, and she saw in the shining eyes a familiar question. She nodded her consent. He sat on the other side of her, looking north toward Bethlehem, while she spun the last of the flax. When her distaff was empty, she took his hands and set them the correct distance apart, then began to wind the final skein of linen onto the hands of the angel.